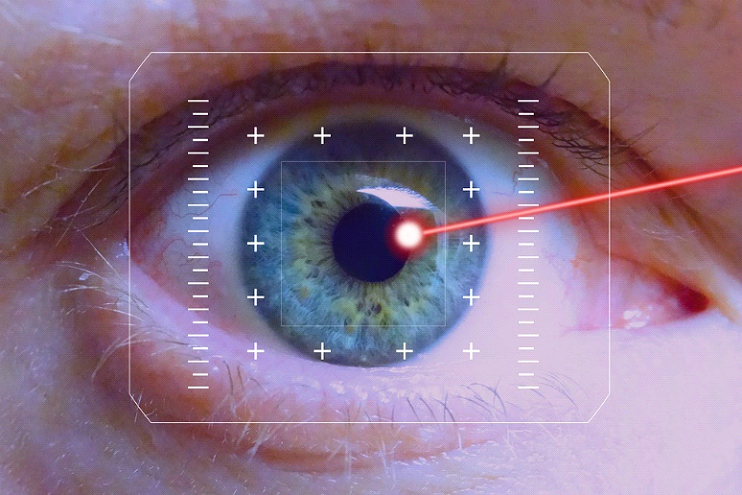 When visiting your Optometrist for your regular eye exam, they may bring up the option of corrective eye surgery. Believe it or not, the concept of using surgery to correct or change a patient’s existing prescription dates back to the 1950’s, with the invention of technique referred to as the “microkeratome and keratomileusis technique”. This would form the basis of modern eye surgery, and is a technique still used to this day.

Laser corrective surgery is considered out-patient surgery, and on average takes about 15 minutes to complete for both eyes. The surgery is mostly painless, numbing drops are used prior to the procedure, and some ophthalmologists may additionally use medication for relaxation. A device is used to hold the patient’s head steady and the eye open. At most the patient may experience some pressure in the eye during the procedure and some itchiness immediately following.

The term laser eye surgery actually refers to a number of different procedures, all of which have similar methodologies to improve a patient’s vision, but differ in the fine details of how they are performed.

Photorefractive Keratectomy – or PRK – is considered the first and oldest type of corrective eye surgery, first performed in 1987 and is still performed to this day, although not as commonly. PRK uses an excimer laser that emits ultraviolet light to reshape a layer of the cornea called the stroma to better focus the rays of light to hit the retina with less scattering, thus resulting in clearer vision. To reach the stroma the Ophthalmologist will use a microkeratome, a very small and fine blade, to cut away the upper layer of the cornea and exposing the stroma to the laser. The discarded layer regenerates over time while the stroma does not, so the stroma will retain its new shape while the upper protective layer heals over a few days.

The Ophthalmologist will place a bandage-contact lens over the eye to help protect it while healing. The size of the incision is small, typically 8-9mm depending on the size of the cornea, and the amount of stroma that the laser cuts away is microscopic. The results of PRK are comparable to the other surgeries showcased today, and is the preferable surgery for patient’s whose corneas are too thin to qualify for some of the newer techniques, but PRK it does have a longer recovery time, longer stabilization period, and more reports of post surgery “haziness”. It is for these reasons that doctors prefer the newer and more well-known LASIK surgery for laser vision correction.

LASIK, or Laser-Assisted In Situ Keratomileusis, built off of the established techniques of PRK and sought to improve on them. First performed in the United States in 1991, LASIK is now the most common laser eye corrective surgery performed today. It follows the same methodology of using a microkeratome to expose the stromal layer of the cornea, and an excimer laser to reshape it, but instead of cutting away the upper corneal layer entirely the Ophthalmologist will cut a “C” shaped flap that can be laid back over the stroma after the procedure. The flap reattaches to the cornea without stitches and bypasses the need for a bandage contact lens. The surgery has an improved recovery time, and most patients see improvement and vision stabilization within the first 24 hours, and any lingering blurriness or haziness improves within a few days after that.

There are two ways LASIK can be performed, Conventional and Custom. Conventional will work off the patient’s most recent prescription to determine how the stroma will be reshaped for optimal correction. Custom, as the name implies, uses Custom Wavefront Technology to additionally measure and map a patient’s eye, thus identifying the “fingerprint” of the eye’s unique shape. This additional precision works better for patients with higher aberrations and larger pupils and increases the accuracy when cutting the corneal flap during surgery. It is not, however, recommended for patients with severe astigmatism, near-sightedness, or fluctuating prescriptions, and typically is more expensive than conventional LASIK. 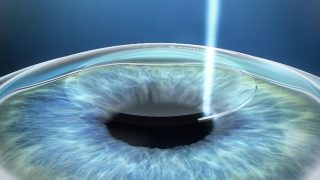 SMILE is the newest incarnation of laser corrective surgery, only gaining FDA approval for use in the United States in 2016. SMILE stands for Small Incision Lenticule Extraction, and takes a different approach with reshaping the cornea to improve vision.

During the procedure, the Ophthalmologist uses a femtosecond laser to create a very small circular bit of tissue called a lenticule within the cornea. They will then create a small incision or about 4mm on the surface of the cornea, just off to the edge to reach the lenticule and pull it out. By changing the shape of the cornea this way, the cornea can heal very quickly and avoid complications associated with creating the corneal flap with LASIK, while still achieving similar results and for an approximately similar cost. Early research also suggests that SMILE has a lower risk for the onset of dry eye symptoms post surgery compared to PRK and LASIK.

SMILE has a smaller range of prescriptions that can qualify for it; it was developed to correct up to -10.00D of myopia, but candidates must have less than -0.50D of astigmatism, and their initial prescription must be stable for at least 12 months before qualifying. However, as the technology and techniques for SMILE are evolving and changing daily, it’s not hard to imagine the list of qualified candidates growing to include other types of prescriptions.

Which type of Laser Vision Correction is right for you?

Figuring out which type of laser corrective surgery is right for you is something that is best discussed with your Optometrist, who can refer you to the Ophthalmologist that is right for your vision needs. To discuss your vision correction options and inquire about your candidacy for any of these surgeries, contact one of our locations closest to you to book an eye exam with one of our Optometrists: on Bloor St in Rosedale, on Wellington St in the Metro area, or on Queen St in the Beaches neighbourhood.