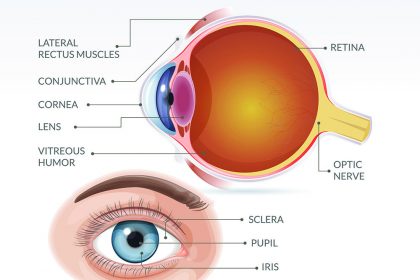 During your regular eye exam, you notice your optometrist making notes about “visual acuity” and writing what looks like fractions in your chart. You’ve heard of the phrase “20/20 vision”, but you see that the optometrist notes down “20/60 uncorrected”.  After looking through a few corrective lenses, the optometrist writes out your prescription, and mentions that you now have a “myopic” prescription. What does that mean?

Your optometrist has you rest your head in the slit lamp so that they can take a closer look at your eye. They mention that the “cornea” looks clear. Then they ask if they can use “dilation drops” to examine the back of the eye and check for “floaters”, and that the drops will increase your light sensitivity for the next few hours. Why? What are dilation drops? Why are they used during an exam? And what exactly is the cornea, and why is it good that it’s clear?

There are many terms and phrases used during a regular eye exam, and you might not recognize all of them. Today, we are going to look at a few of the most common terms that come up during eye exams.

What is Myopia? Hyperopia? Emmetropia? 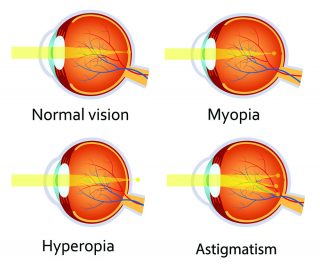 These terms all refer to the type of refractive error – or prescription – that can affect the eyes. Myopia is commonly referred to as “near-sightedness” and means that a patient has an easier time seeing objects clearly up close than at a distance without the aid of corrective lenses or contact lenses. Patients who are myopic will see a minus (-) sign in front of the numerical power in the Sphere or SPH column of their prescriptions. Myopes are characterized by having “too much focusing power” to allow them to see distance objects clearly.

In contrast, hyperopia is where the patient has an easier time seeing objects at a distance, but they must put in more focusing effort to do so and have a much harder time seeing objects up close clearly. Patients who are hyperopic will see a plus sign (+) in front of the numerical power in the Sphere or SPH column of their prescriptions. Hyperopes are those that have “underpowered” eyes, and thus they have a harder time seeing things up close, but still struggle a bit with the distance as well.

And in comparison to both of these, emmetropia is where there is no refractive error or prescription requirement at all. It is considered by optometrists to be a “normal eye” and is used as a point of comparison for measuring visual ability and acuity.

Another term that describes a refractive error type, presbyopia refers to the degeneration of the eye’s ability to see things up close as we age, regardless of what kind of prescription the patient had prior. The muscle or lens inside of the eye – separate from the cornea – is normally very elastic when we are younger and will adjust in size when we are trying to focus on objects up close. As we age, this lens loses its elasticity, making it harder to focus properly up close. Symptoms of this physical change start to show up around the age of forty, and for most patients become significant enough to require specific reading correction around forty-five. You can be myopic, hyperopic or emmetropic and still develop presbyopia.

Astigmatism is another term referring to a type of refractive error. Where myopia and hyperopia refer to an eye’s over-powered or under-powered ability, and presbyopia refers to diminishing focal power at a specific distance over time, astigmatism results from the actual shape of the eye and will affect focusing power at all distances. An astigmatic eye is one that is more cylindrical in shape as opposed to spherical, which bends and scatters light unequally instead of uniformly. This means that no matter how hard the eye tries to focus on something, because the light is not landing on the retina all in one spot, the image the patient sees is blurry and unfocused.

No eye is perfectly spherical, and small amounts of astigmatism are typically ignored by the brain and no symptoms are experienced by the patient. However, larger amounts cause significant blurring and inability to distinguish shapes. Astigmatism is corrected through lenses or contact lenses that have been shaped in such a way to match the “cylindrical” shape of the eyes as close as possible, which bends light back into that uniform shape. Astigmatism can also be corrected through surgery in some cases. If your prescription has astigmatism, it will be noted down in the Cylinder or CYL and Axis columns.

What is Visual Acuity?

Commonly mistaken as a prescription value, visual acuity is a graded measurement of an eye’s ability to see and distinguish shapes and details of an object at a specific distance. It typically appears as a fraction, either resembling “20/20” or “6/6”, with the upper number representing what distance the patient’s eye can see the specific object, and the bottom number representing the distance an “emmetropic” eye can see the same object. For example, a patient only clearly sees the letters on the chart at 20 feet when the normal eye can see them at 30 feet. The optometrist would then note the visual acuity of that eye as “20/30”.

Visual acuity is measured a few times during a regular exam and will sometimes have additional notes such as “uncorrected” or “best corrected” next to them. Optometrists will measure a patient’s visual acuity with no glasses, contact lenses or other visual aids first to get a baseline (“uncorrected”), and then with the use of the phoropter or other lenses attempt to bring the patient’s acuity as close to “20/20” as possible (“best corrected”). Just because you wear glasses doesn’t mean you aren’t able to achieve 20/20 vision, it just means you require glasses or contact lenses to do so.

What is the Cornea? 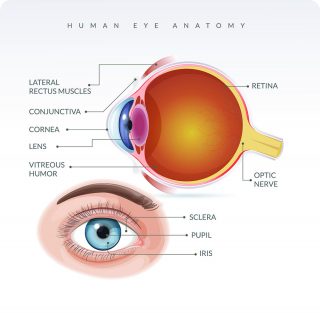 Another term that comes up often during an eye exam is the cornea. This is a transparent physical part of the eye that covers the front-most part of it. It completely covers the iris and pupil, is responsible for a great deal of the eye’s visual ability and prescription and helps to protect much of the inner parts of the eye. The cornea also plays a huge role in successful contact lens wear, and the ability to wear certain brands, sizes, and shapes. Every cornea is unique, most are not perfectly smooth like the surface of a ball but have high points and low points along certain meridians. The shape of the cornea greatly affects the eye’s prescription, hence most laser or corrective surgery involves reshaping the cornea in specific ways to alter a patient’s prescription, though there are limits to this. The cornea is made up of five separate layers, from the uppermost layer down they are the “epithelium”, “Bowman’s membrane”, the “stroma”, “Decemet’s membrane” and the “endothelium”.

What is the Eye Lens?

The lens within the eye, also known as the crystalline lens, is the structure within the eye that helps to focus rays of light to land on the retina, thus allowing us to see. The lens is a very elastic structure of clear tissues that are controlled by muscles holding in in place behind the pupil and in front of the retina. When the brain sends the appropriate signals, the muscles pull and shape the lens which increases or decreases the focusing power to let light passing through the eye hit the retina properly. If light cannot hit the retina properly, is may be due to the shape of the eye itself or the shape of the cornea affecting its path, thus the need for a prescription.

As we age, the elasticity of the lens starts to weaken, the muscles become stiffer and the clear tissues that make up the lens start to become cloudy. The lens spends more and more of its time in the “default” shape, which does not help with focusing on objects up close. Using reading or progressive glasses will help with the changes in visual clarity, but eventually the clouding of the lens will increase until a cataract is formed, which is the hardened form of the crystalline lens. At this point it must be surgically removed to allow light to pass through the eye freely again, and artificial implants are put in to help focus the light on the retina.

What is Dilation? What are Dilation Drops? 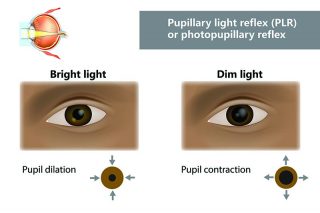 To “dilate” means to widen an opening. In optical terms, dilation refers to the actions of the pupil opening to allow more light through the eye. If you think of the eye as a camera system, then the pupil is the aperture that controls the amount of light entering through the system and hitting the film, or the retina, at the back. The size of the pupil is controlled via signals sent by the brain in response to light levels in your surroundings; high light levels mean the pupil will be smaller, as to not allow too much light through the eye, and low light levels require a larger pupil to allow as much light as possible through.

During an eye exam, optometrists need to be able to see clearly through to the back of the eye in order to examine the full scope of the retina and the condition of the macula, two structures that play a huge role in the ability to see. Whether the optometrist chooses to use retinal imaging or through the slit lamp biomicroscope, the pupil needs to be of adequate size to get a good view of the inside. As the instinct is to close the pupil under harsh or bright lighting, the optometrist may request the patient’s consent to use dilation drops. These drops temporarily widen the opening of the pupil and paralyze the pupil’s ability to change size, preventing it from shrinking during the remainder of the exam.

What is a Floater?

To understand what a floater is, first you must understand that the globe or ball of an eye is not solid. It is comprised of two “chambers” filled with fluid; a chamber behind the cornea and in front of the crystalline lens, and the other chamber behind the lens and in front of the retina. It is in this second chamber that floaters tend to originate. A floater is a particle that forms within the fluid – called vitreous fluid – that is large enough to cast a shadow on the retina when it floats between it and the light entering the eye. These shadows can all look very different depending on the shape of the floater, from small lines to spots, from cobwebs to cotton wisps.

Floaters on their own cause no harm aside from being mildly annoying as they move about, but a sudden increase in their number, or abrupt change in their appearance, or any other visual disturbance or distortion occurring in that eye can indicate more serious ocular conditions and should be brought to the attention of an optometrist as soon as possible.

No matter the setting, medical terminology should not be intimidating. Optometrists are more than happy to explain what certain terms and phrases mean, and what they mean for you as a patient. Feeling more prepared for your next eye exam? Reach out to any of our three locations to book your eye exam: 360 Eyecare – Rosedale, 360 Eyecare – Beaches and 360 Eyecare – Metro. 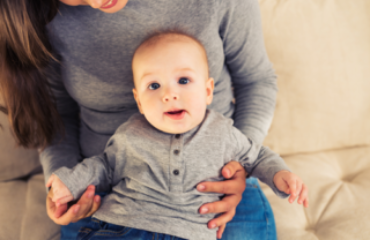 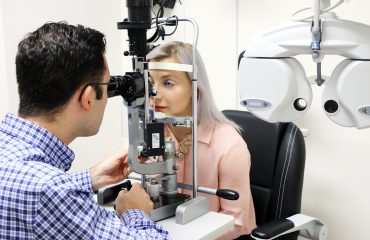 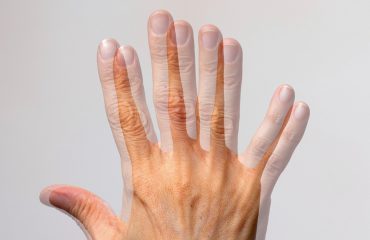